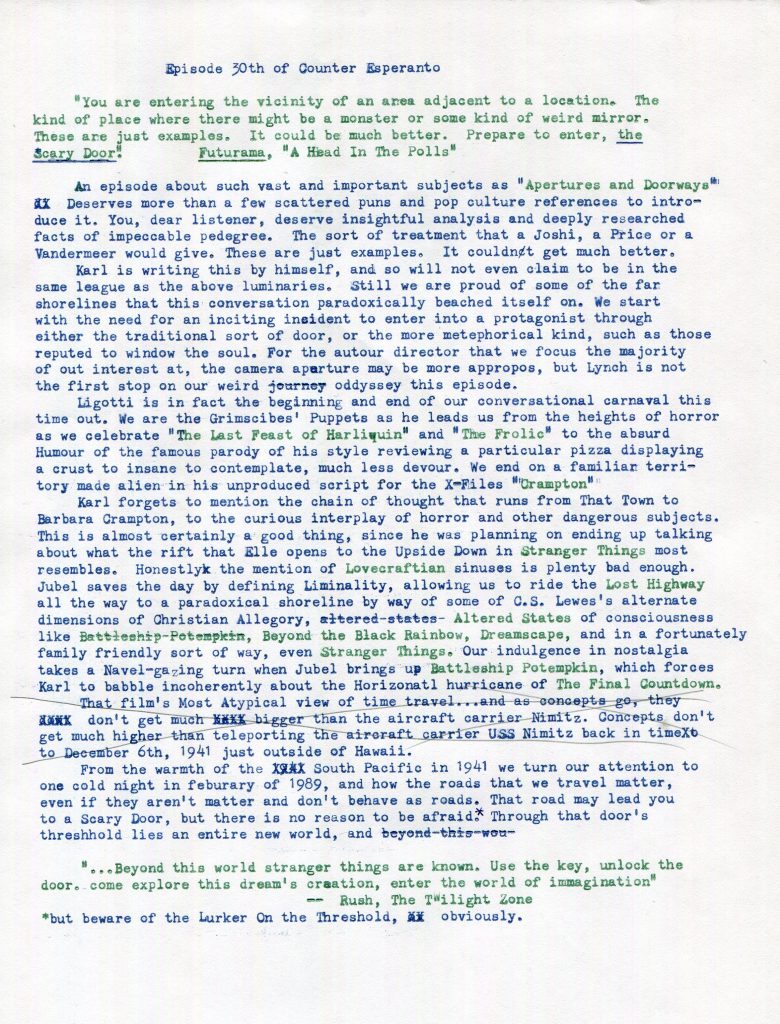 “You are entering the vicinity of an area adjacent to a location. The kind of place where there might be a monster or some kind of weird mirror. These are just examples.  It could also be something much better. Prepare to enter, The Scary Door.”

An episode about such vast and important subjects as “Apertures and Doorways” deserves more than a few scattered puns and pop culture references to introduce it. You, dear listener, deserve insightful analysis and deeply researched facts of impeccable pedigree. The sort of treatment that a Joshi, a Price or a Vandermeer would give. These are just examples. It couldn’t get much better.

While not that, we are still proud of some of the far shorelines that this conversation paradoxically beached itself on. We start with the need for an inciting incident to enter into a protagonist (or at least their house) through a door of some kind. This is either the traditional sort of door, or the more metaphorical kind, such as those reputed to window the soul.  For the auteur director to which we focus much of our interest, the camera aperture may be more apropos, but Lynch is not the first stop on our weird odyssey this episode.

Ligotti is in fact the beginning and end of our conversational carnival this time out. We are the Grimscribe’s Puppets as he leads us from the heights of horror celebrating “The Last Feast of Harlequin” and “The Frolic” to the absurd humor of the famous parody of his style reviewing a particularly horrifying pizza product sporting a crust too insane to contemplate, much less devour. We end on a familiar territory made alien in his unproduced script for the X-files: “Crampton.”

Karl forgets to mention the chain of thought that runs from That Town to Barbara Crampton, to the curious interplay of horror and other dangerous subjects. This is almost certainly a good thing, since he was planning on referencing what the rift that Elle opens to the Upside Down in Stranger Things most resembles. Honestly, the mention of Lovecraftian sinuses is plenty bad enough. Jubel saves the day by defining Liminality, allowing us to ride the Lost Highway all the way to a paradoxical shoreline by way of CS Lewis’ alternate dimensions of Christian Allegory, Altered States of consciousness like Beyond the Black Rainbow, Dreamscape, and in a fortunately family friendly way, Stranger Things. Our indulgence in nostalgia takes a Naval turn with Jubel’s mention of Battleship Potemkin and Karl’s incoherent babble about the horizontal time-traveling hurricane that swallows the USS Nimitz in The Final Countdown.

From the warmth of the South Pacific in 1941, we turn our attention to one cold night in February of 1989, and how the roads we travel matter. Even when they aren’t matter and don’t behave as roads. Those equivocal paths may lead to you to a set of freestanding curtains or a Scary Door, but there is no reason to be afraid. After all, fear is the mind-killer that gets you eaten by the Lurker On The Threshold. If you let the path pass through you, and turn your mind’s eye back toward the shimmering aperture you will realize that,

“Beyond this world strange things are known.

Use the key, unlock the door.

Enter the world of imagination.”