In this episode, your hosts delve into two jungles; one 8,000 miles removed from from familiar Twin Peaks psychogeography, and the other in the very center of America’s heartland.  One set in, arguably, the most hopeful American Decade, the 1960s.  The other marinates in the psychic despair of “The End of History.”

Both, in their own ver different ways could be called Cold War movies.  They depict the varied fields the first Post-Modern War took place on: one at its figurative and literal hottest, the other in the chill of its coldest pyrrhic victory, where the forces of Liberal Democracy declared themselves winners of the conflict, and in so doing managed to grab defeat from the rushing jaws of victory.  This juxtaposition became even more interesting to us when  we realized that both “Apocalypse Now” and “Candyman” have their tap roots sunk deep into the 19th century, the slave trade, and the most murderous ghost to ever stalk the world: Colonialism.

So, what does a psychedelic war movie based on Joseph Conrad’s 19th century critique of Belgian murder in the Congo, “Heart of Darkness”, have in common with a ghost story set in Chicago’s most notoriously failed housing project?  Join us and find out what we think about domineering, even cannibalistic power structures, the desperate revenge and stratagems of resistance by oppressed lands and peoples, and the weird nature of very real evil have to do with it.

If you are patient with us, we will trace Conrad’s river of blood through its roots in a disturbingly mundane 19th century colonial genocide to the weirdly repressive focus of slasher mythopoetics up to the present moment (“The horror. The horror.”) we find ourselves in.  If you are very, very patient with us, we might even say something about how all this relates to how Lynch and Frost see the World.

Some jungles are made of Douglas Firs. 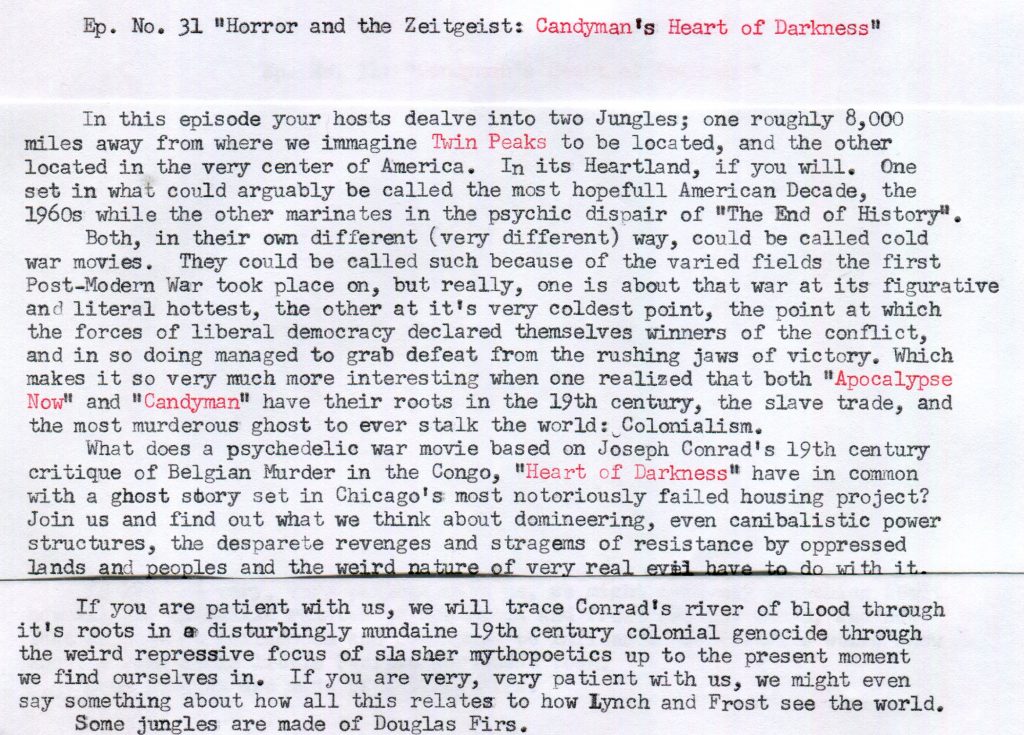